Something I’ve known about myself for quite a while – I’m a worrier. Or at least, that used to be the term. In more recent years, I’ve been diagnosed with anxiety disorders. I still stick with “worrier.” A result of traumatic events, it can be as mild as an annoying thought, or as immediate and urgent as a “meltdown” – although those are rare.

Something I’ve also known about myself for years – I have a simple coping mechanism that can often alleviate the worry or anxiety. I plan. I prepare. I organize.

Those that know me may be surprised by this. My house doesn’t look that organized. But it’s a mental game more than anything. 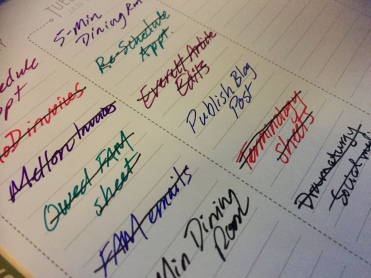 You see, I stumbled on a method mental health professionals actually “prescribe” to patients. For those dealing with anxiety, often a symptom of Post Traumatic Stress Disorder, they will ask them to prepare for what they are anxious about, or something adjacent.

This may seem counter-intuitive – won’t a big list of all the things you need to do just make things worse? For me, it first makes me realize I have more control than I thought over the situation. And often I’m not as behind as I thought. Or if I am, I’ll organize those bigger things into smaller tasks that feel more manageable. I plan for getting those smaller tasks done, by when. They can be as small as “Create a reminder for myself about XYZ.” And often I’ll complete at least one of those items right away.

By the time I’m done organizing, much of the anxiety will be released. As is so common with anxiety, most of the worst-case-scenarios are not as grounded in reality. It just takes a few lists to get there.

But sometimes worst case scenarios are quite real. And most people struggling with anxiety disorders, PTSD, depression, etc., HAVE had something “worst case scenario” happen to them. There’s real reason to have fear. It’s not irrational.

Planning and organization can be remarkably helpful for these issues, too.

The most recent case here in Alaska is the recent 7.0 earthquake. The epicenter was directly under roughly half of the state’s population. Roads collapsed, ceilings fell, houses were lost. Miraculously, nobody was seriously injured.

Or rather – due to miracles and preparation. You see, while the modern infrastructure of Alaska is relatively new, most of it was built after the 9.2 earthquake that hit Alaska in 1964. One of the worst earthquakes in history, few communities in Alaska were unaffected. People died, communities were devastated.

And so, in the rebuilding, this was fresh on everyone’s mind – that this could happen again. While so many struggled with mental health issues due to the trauma, they turned that anxiety into action. Alaskan – specifically Anchorage – building codes are some of the strictest in the world now. And how our infrastructure survived a direct hit like this is a testament to what a little worry can accomplish when it’s put to work.

In the same way, personal preparation can help make you and your family safer. And as a huge bonus, it’s a great way to help alleviate anxiety, depression, and other symptoms of PTSD. Our bodies are built to be resilient – but we have to help them out. Train them to respond in a way that is most helpful, healthy, and strong. That chronic fear reflex that is getting in your way now may need to be addressed through professional counseling, may need talking to a friend, and it just may need you physically becoming more prepared for another disaster.

So, all that to say, this was on my mind even before the November earthquake. I had gathered these disaster preparedness buckets for family before it hit, and they just needed a few finishing touches. When it did hit, and power was out everywhere, and Anchorage was on a boil-water advisory, I ruined the surprise and told them about them – I had included supplies for just those eventualities.

There are so many ways you can prepare, what I had already decided on was a “shelter in place” kit. This is the assumption that were you are is more safe than traveling anywhere else, and you already have some first aid supplies, and maybe a week’s worth of food for your family. It is also built under the assumption that the power doesn’t work, the water isn’t safe, there’s no heat, and it’s winter.

If you’re still struggling with the earthquake (especially since these aftershocks never seem to stop!), or even similar trauma, I would definitely suggest you try some emergency preparation. The worst that happens is that it doesn’t work for your own mental wellness – but you and yours are more prepared! And the best case scenario is it helps you feel more empowered, alleviates some of the stress, AND you’re still prepared!

I also want to add, while these buckets were for my family, this is definitely a “put your own mask on first” kind of situation. I am not helpful to my family in any emergency if I am not prepared myself, so my own preparedness definitely exceeds my gifts (and I’ve been doing it for years!)

While this is my first post on the topic, it’s only the beginning. This year I’ll be doing a series on disaster prep from an Alaska Native point of view.

YOU’LL JUST HAVE TO SEE!

For now, I’ll leave you with the list of the bucket’s supplies, and why I included them. Including a printable PDF!

Very pretty sunset on the mountains today.
Look what happens when Elmo meets a Tlingit friend! Gunalcheesh to KTOO Public Media and X'unei Lance Twitchell for teaching Elmo amazing Indigenous things!
Martin and Carlisle are doing some kinda boudoir shoot.
First time capturing the Northern Lights with my iPhone. Long ways to go but it was fun to try! Flat Top in Anchorage.